Whether you say “tomayto” or “tomahto,” we love our tomatoes! Over 7500 varieties are grown and enjoyed worldwide. While we often think of them as a vegetable, botanically they are a fruit because–along with its seeds–it is the ovary of a flowering plant. Tomatoes have a much lower sugar content than other edible fruits, which is part of the reason why they are considered a vegetable for most culinary uses. One exception is that they are treated as a fruit in home canning practices because they are acidic enough to process in a water bath rather than a pressure cooker as vegetables require. Note, however, you can use a pressure cooker if you prefer. The higher temperature and shorter cooking time result in better flavor and less spoilage.

We recently went to Portland Farmer’s Market on S.W. Park, near Portland State University, and came away with 80 pounds of organic tomatoes from one of our favorite local farms, Kuenzi Farms from Silverton Oregon. They’re at the market every Saturday and sell their delicious organic tomatoes for 99 cents per pound. 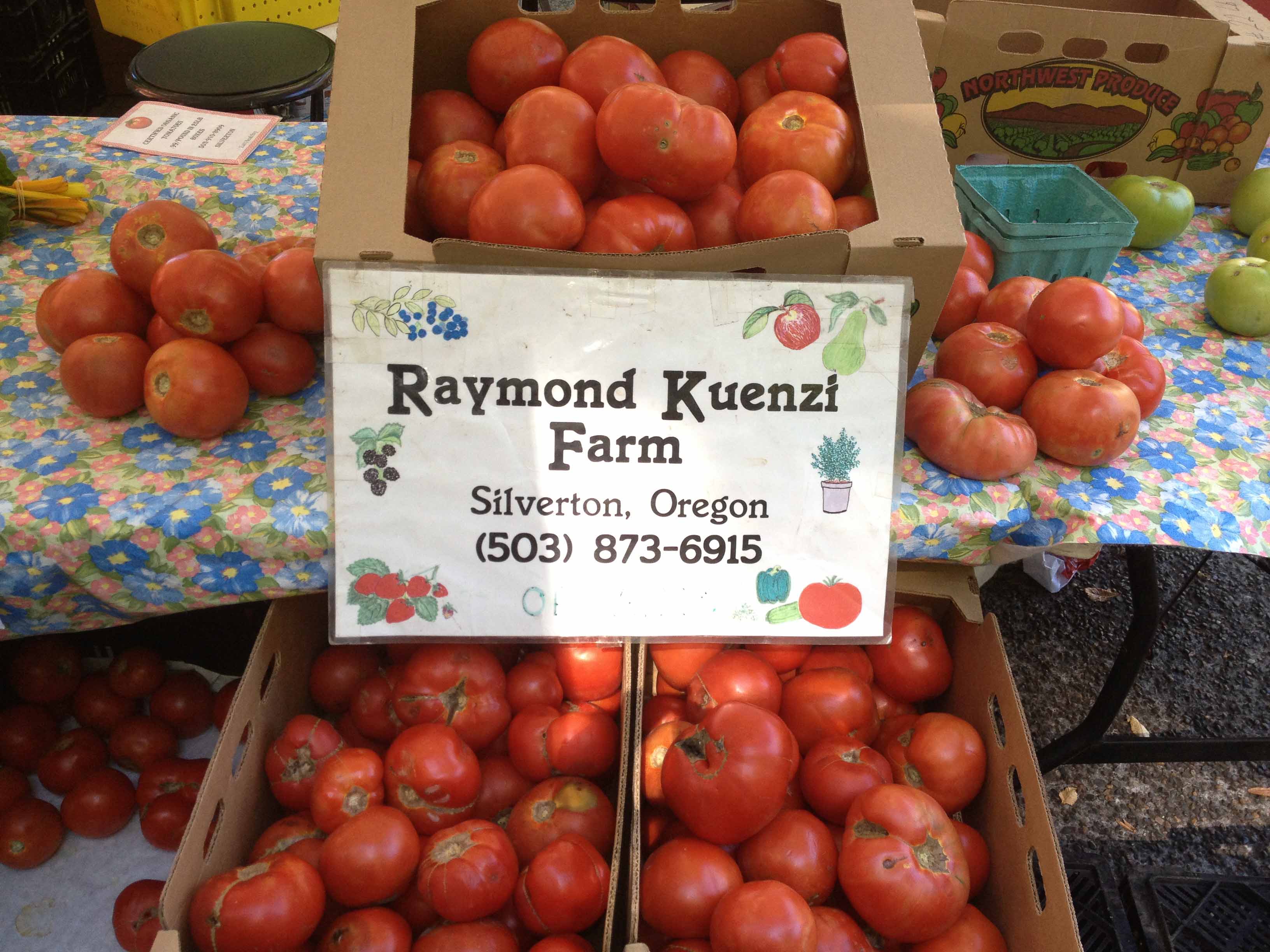 With 80 pounds of tomatoes, we’re ready to do some serious canning! Follow along with us as we get our jars and tomatoes all prepped and ready for us to enjoy throughout the coming months. The first thing we do is to sanitize our jars and get them ready to fill. 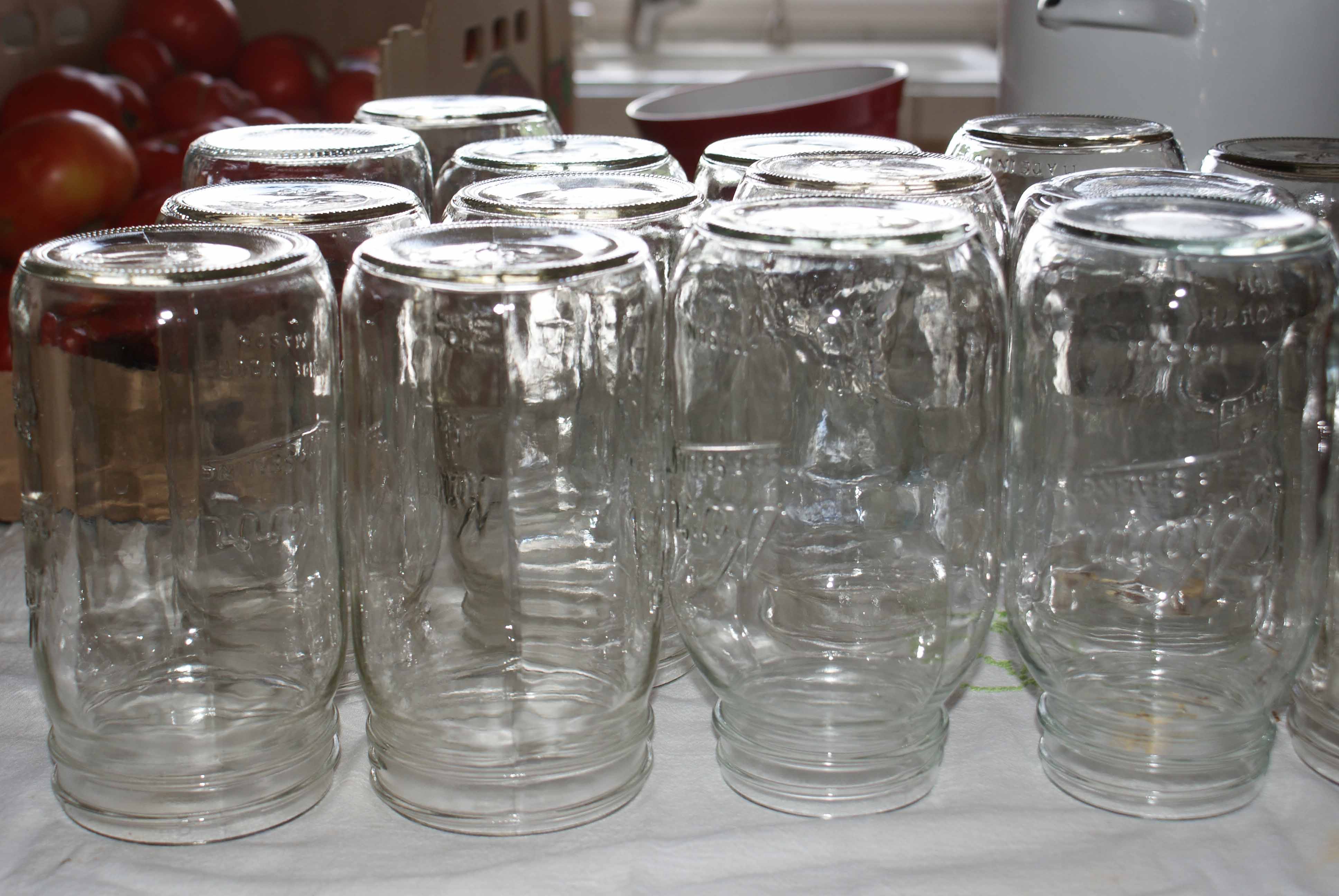 Next we add two tablespoons of lemon juice and a teaspoon of canning salt  to each jar. 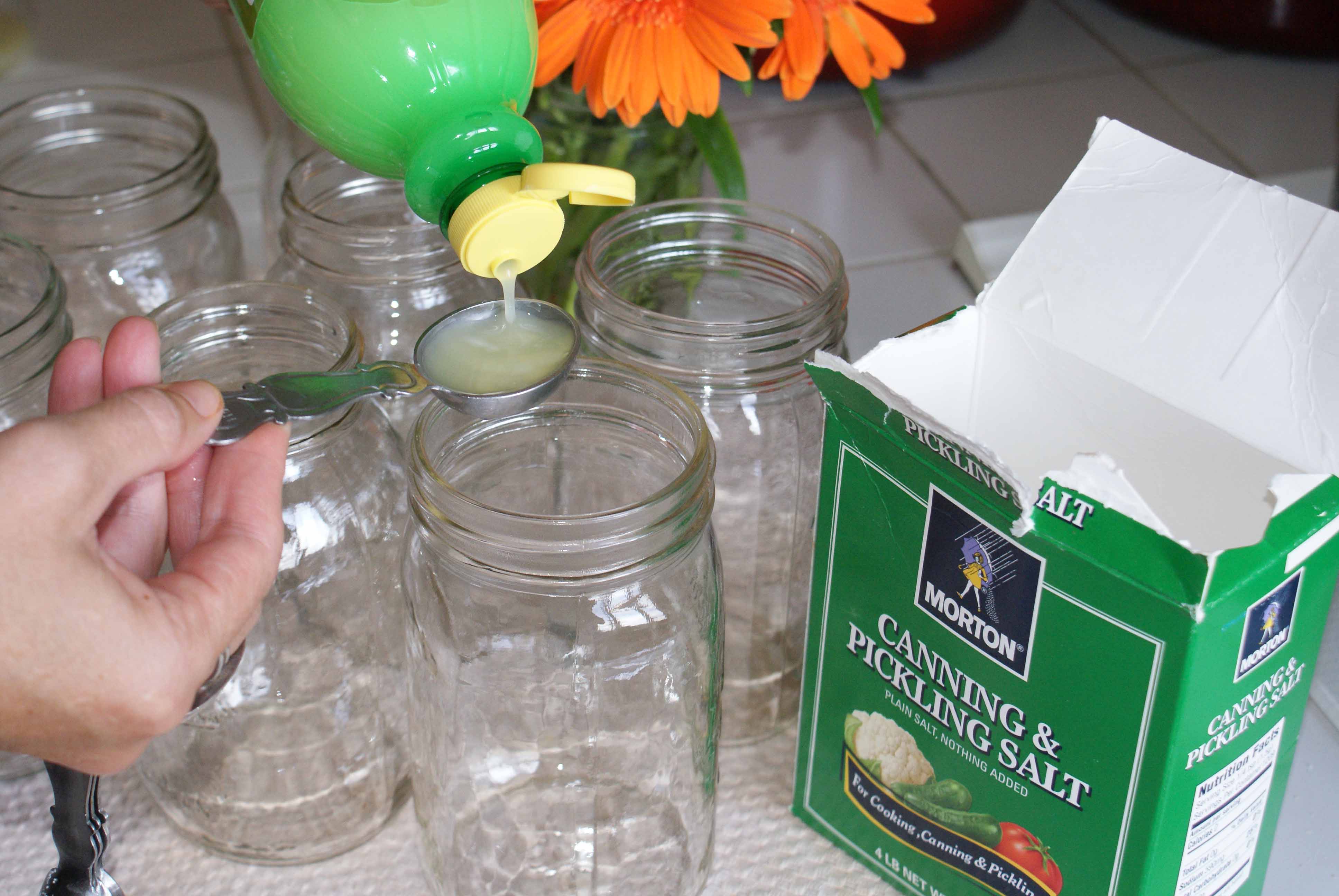 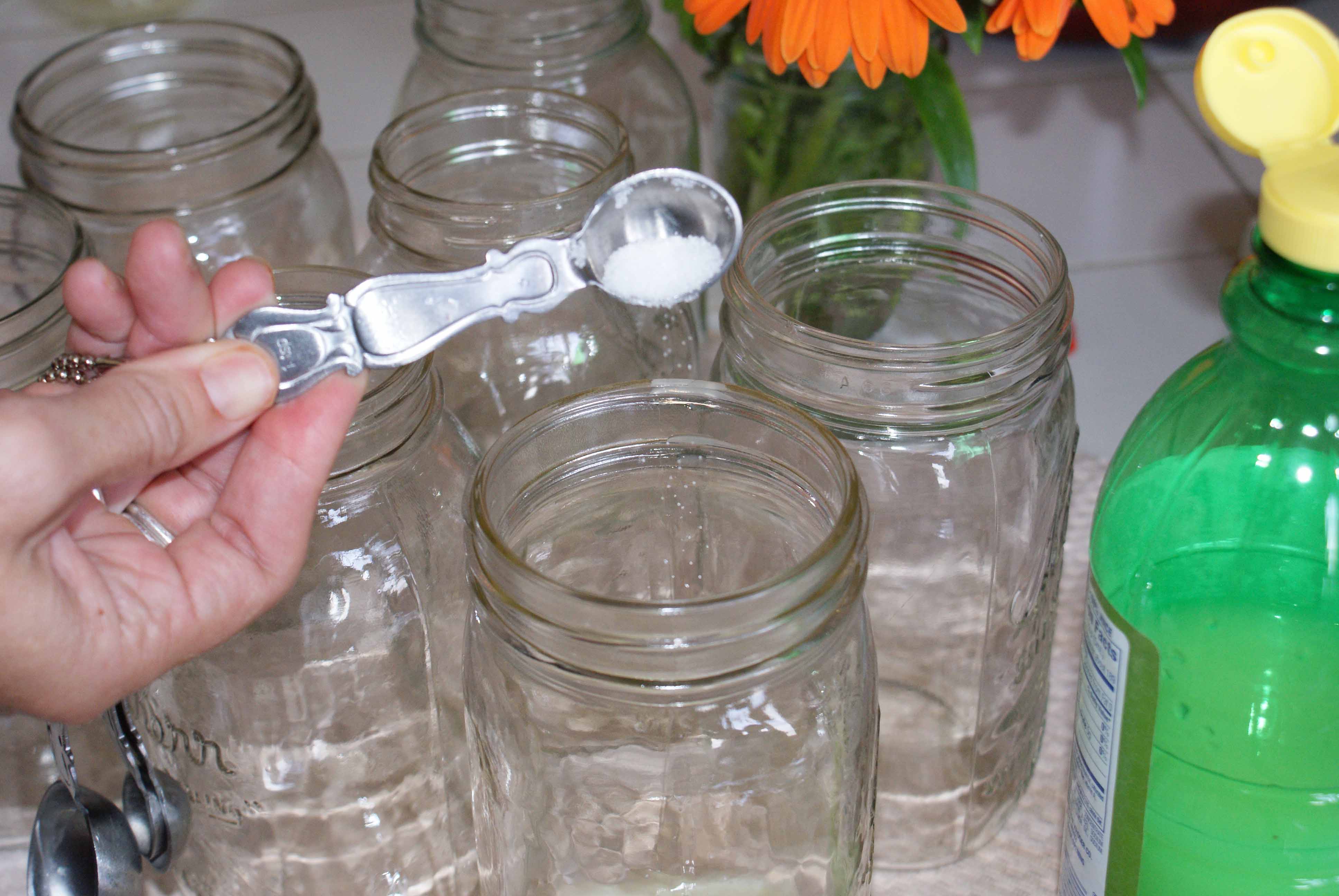 Now to work with the tomatoes. First you need to remove the skins. to do this, put them in boiling water for about a minute. 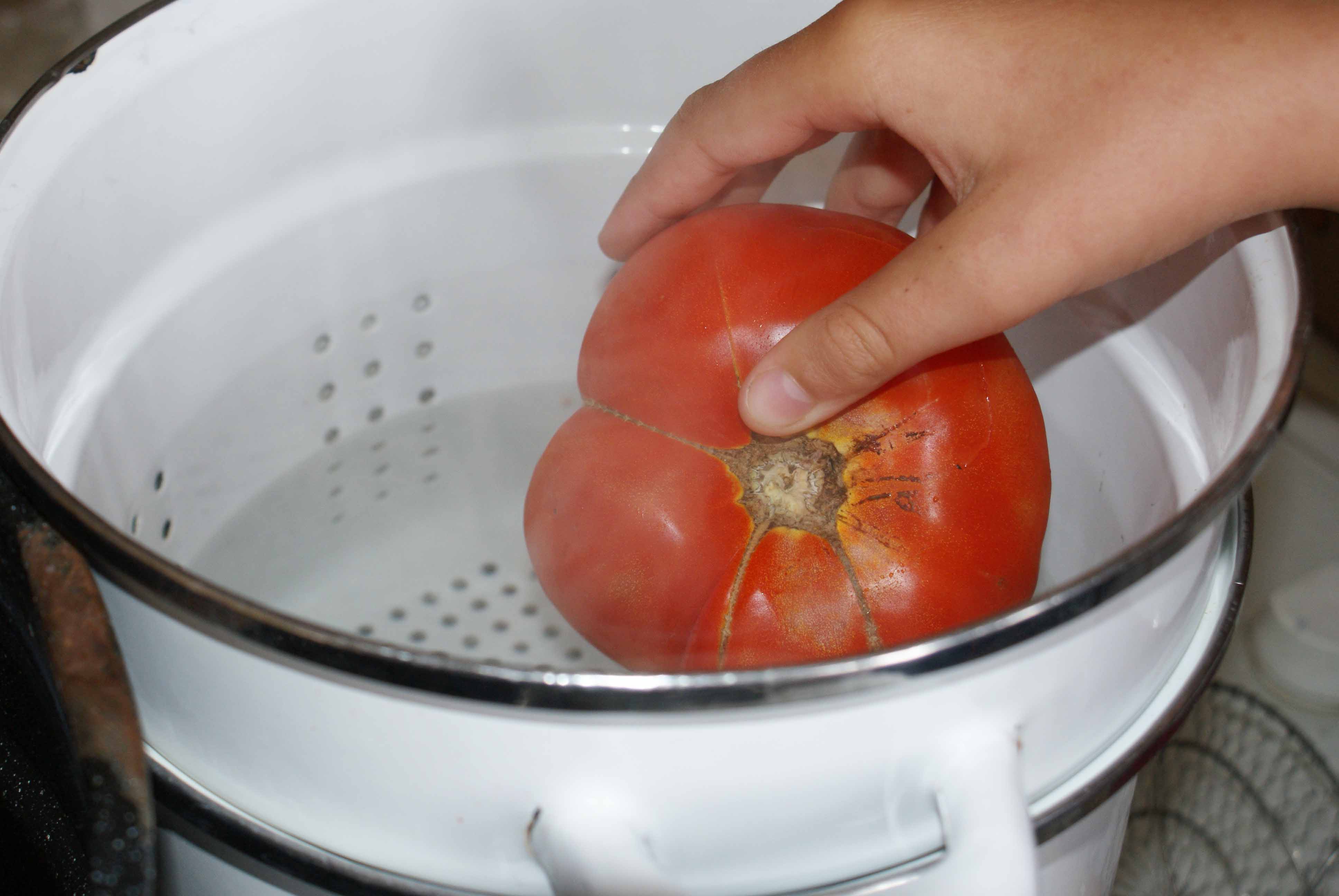 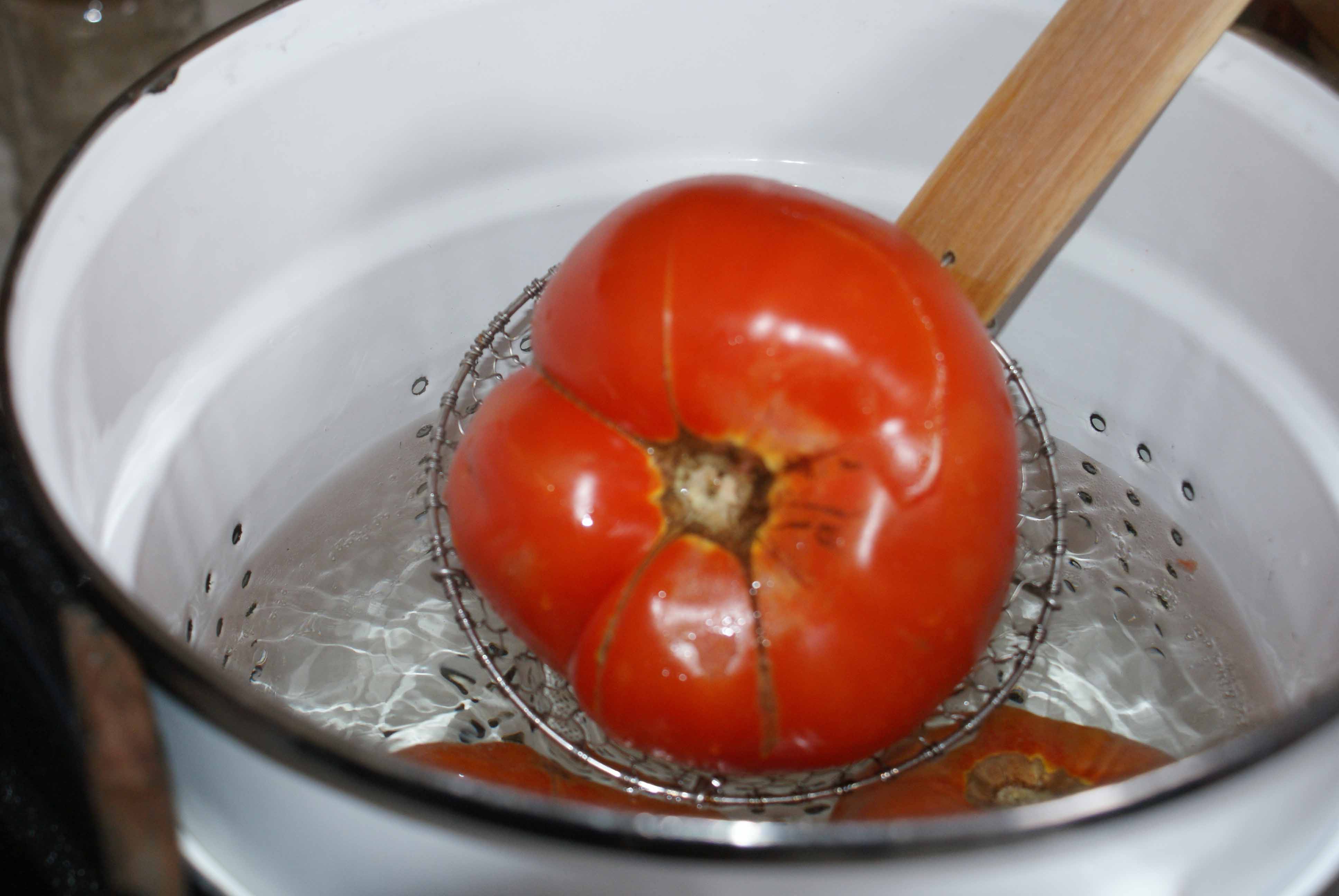 and place them in an ice water bath. 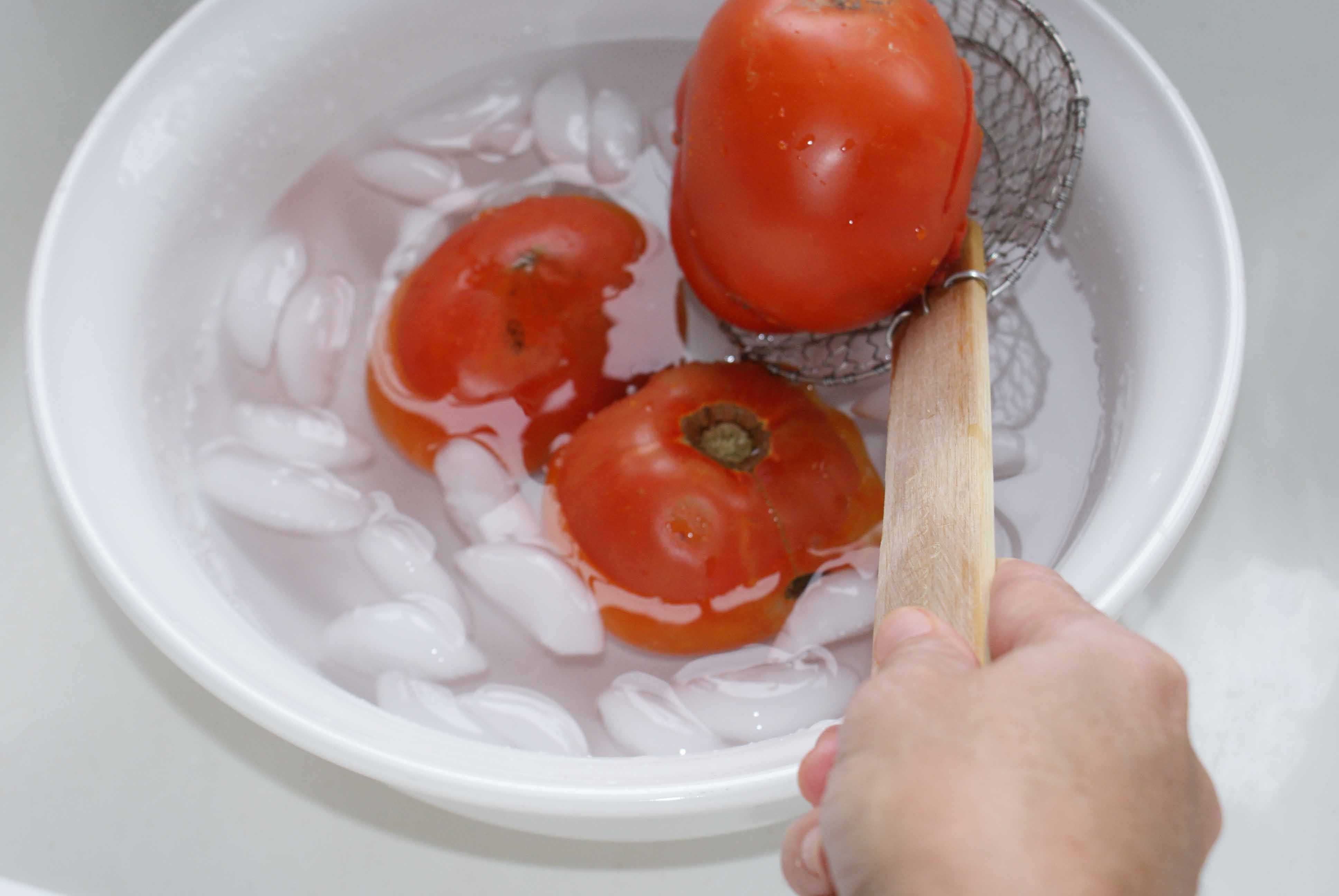 After you do this, the skins come right off. 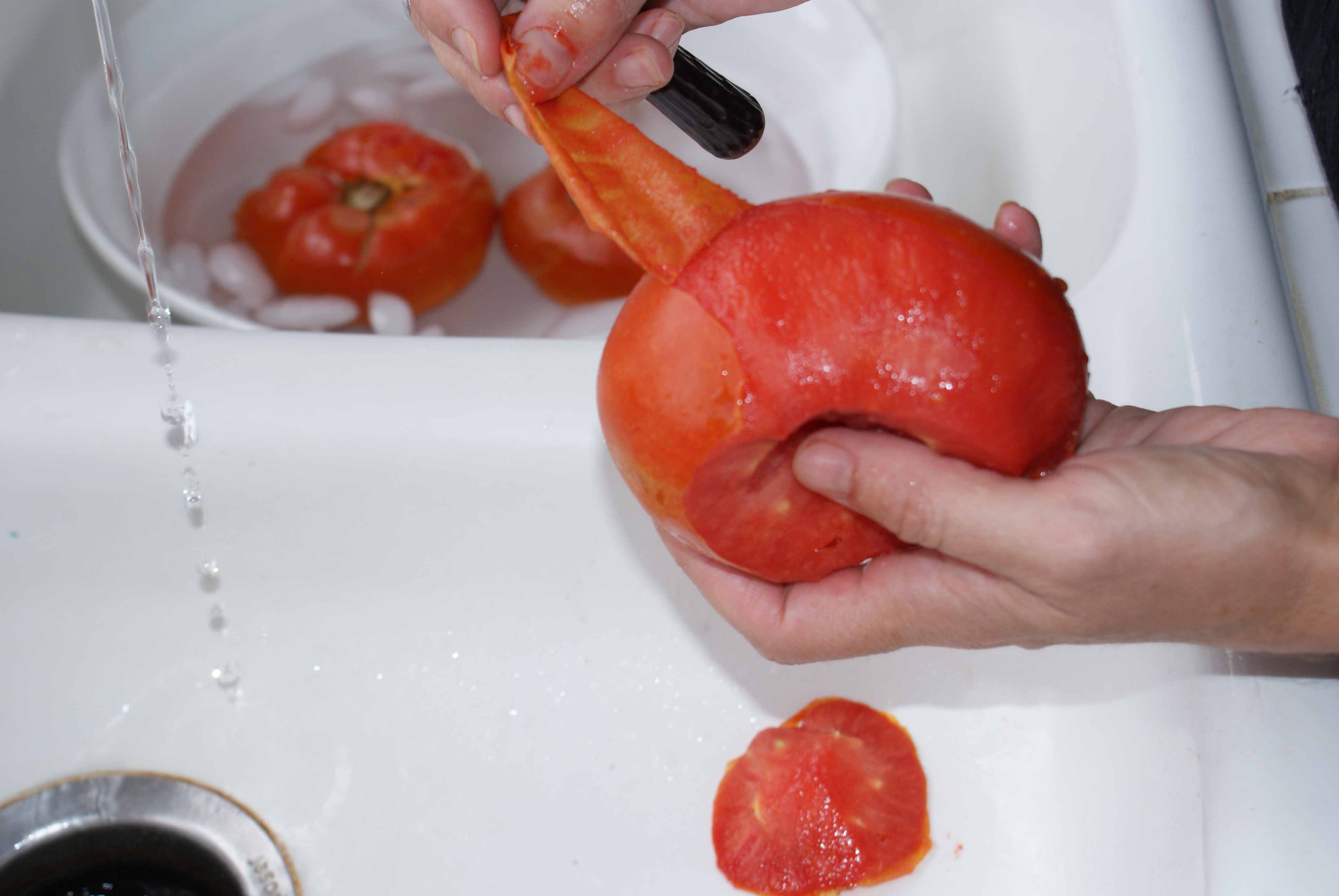 As you peel the tomatoes, cut them into quarters and remove the tough part around the stem, as well as any bruised or soft parts. (pic 09-1)

Next fill the jars with tomatoes.

Then fill the jars with boiling water. (pic 10) 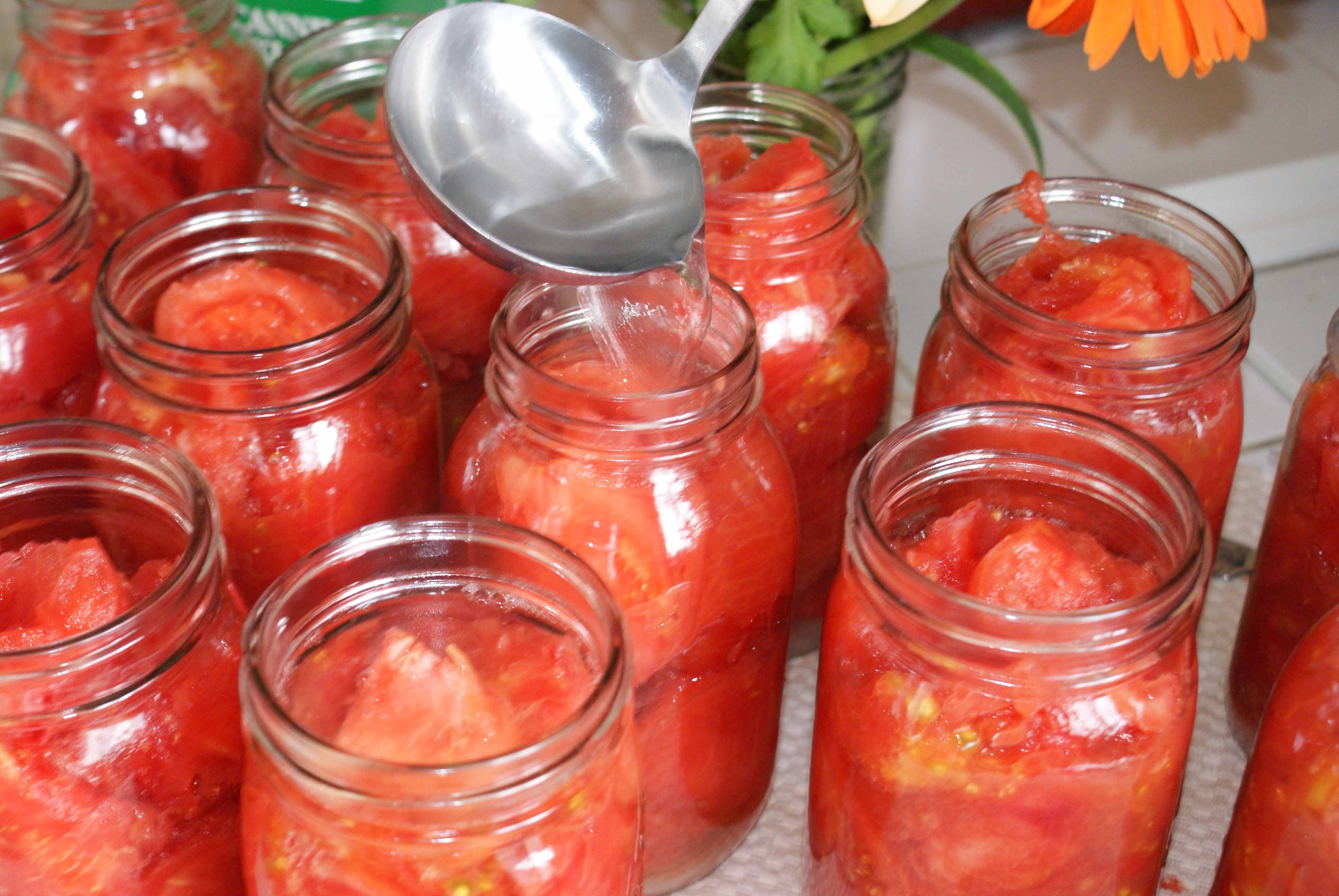 Use a flat utensil such as a butter knife to remove any trapped air bubbles. Slide it gently up and down around the inside edge. 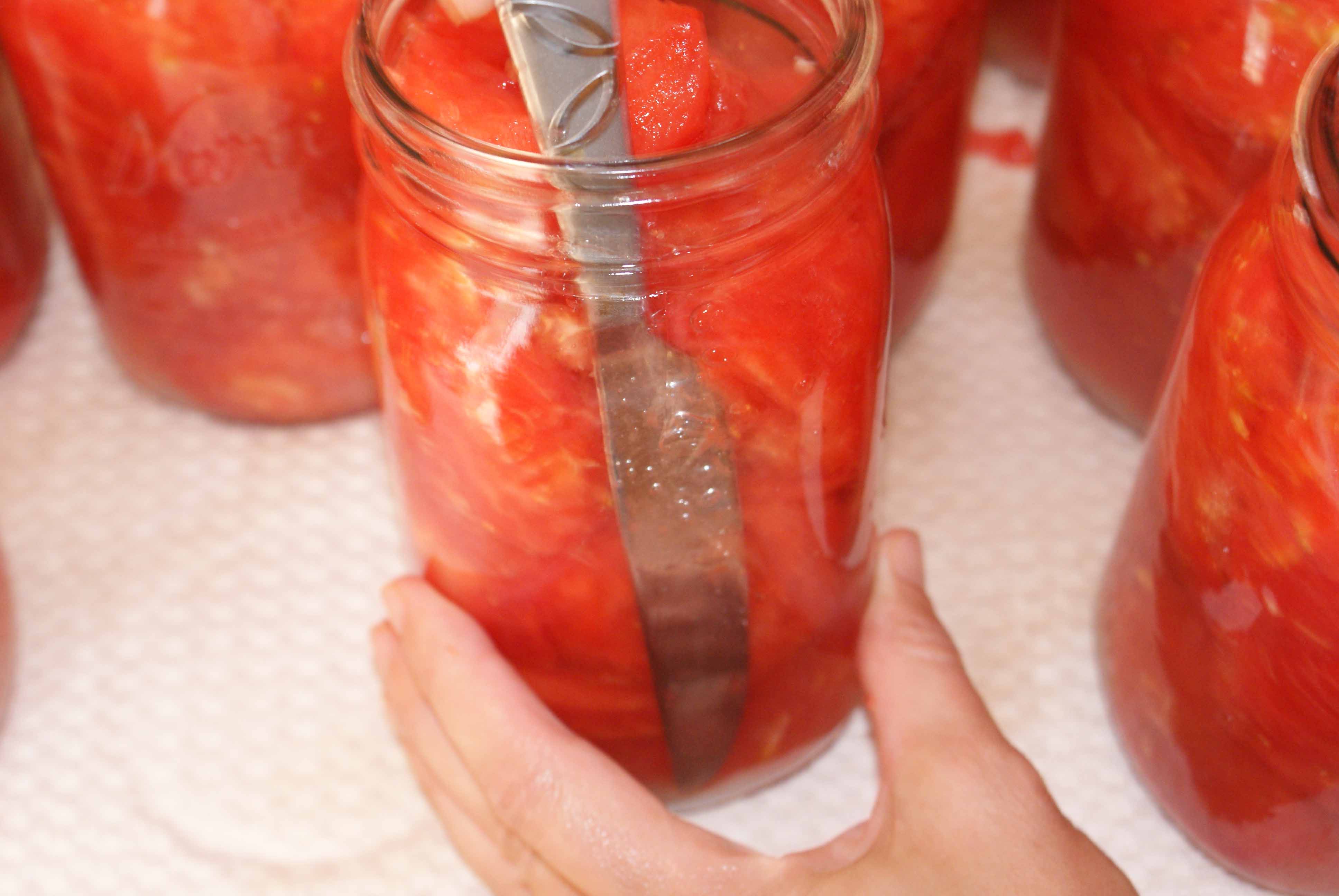 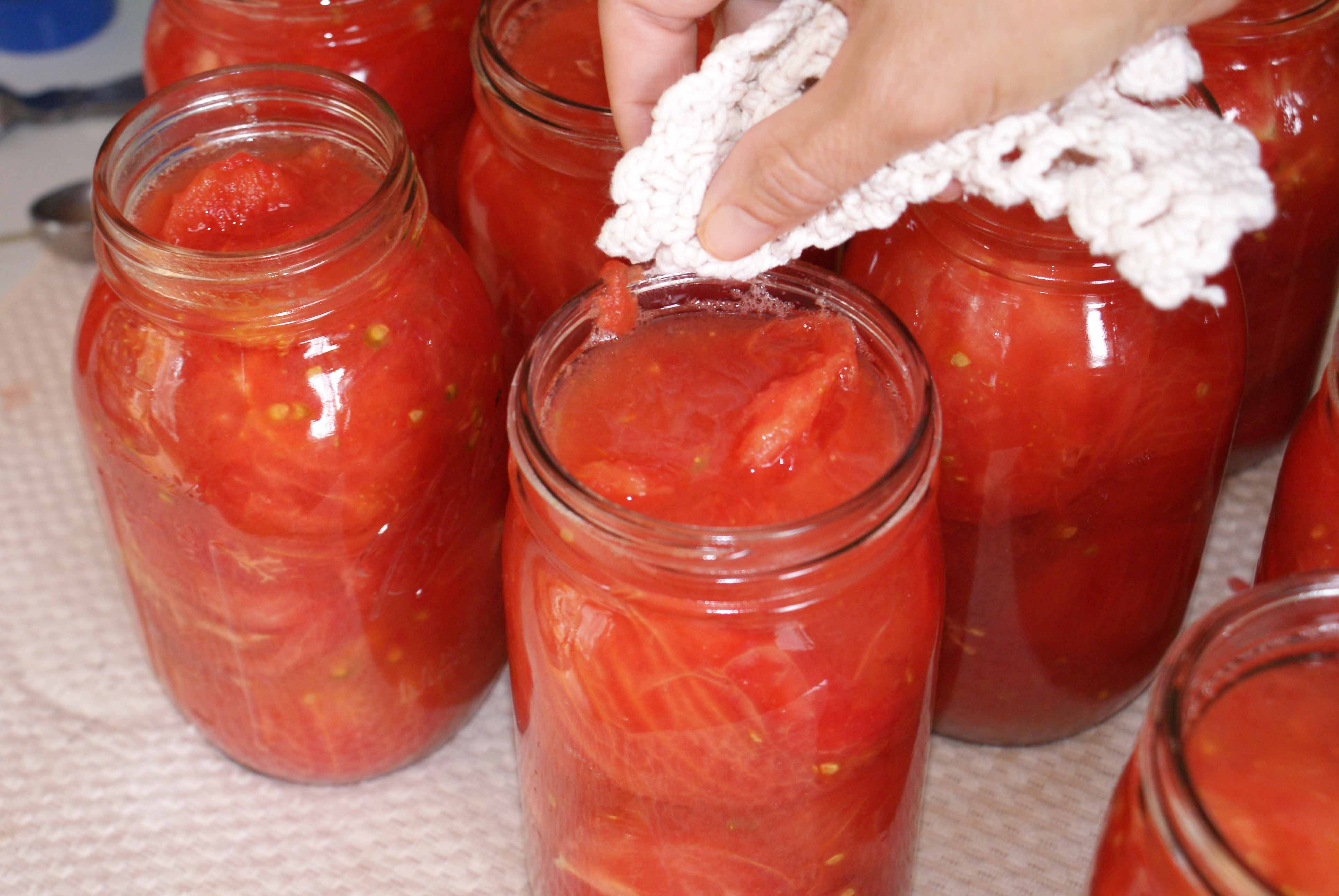 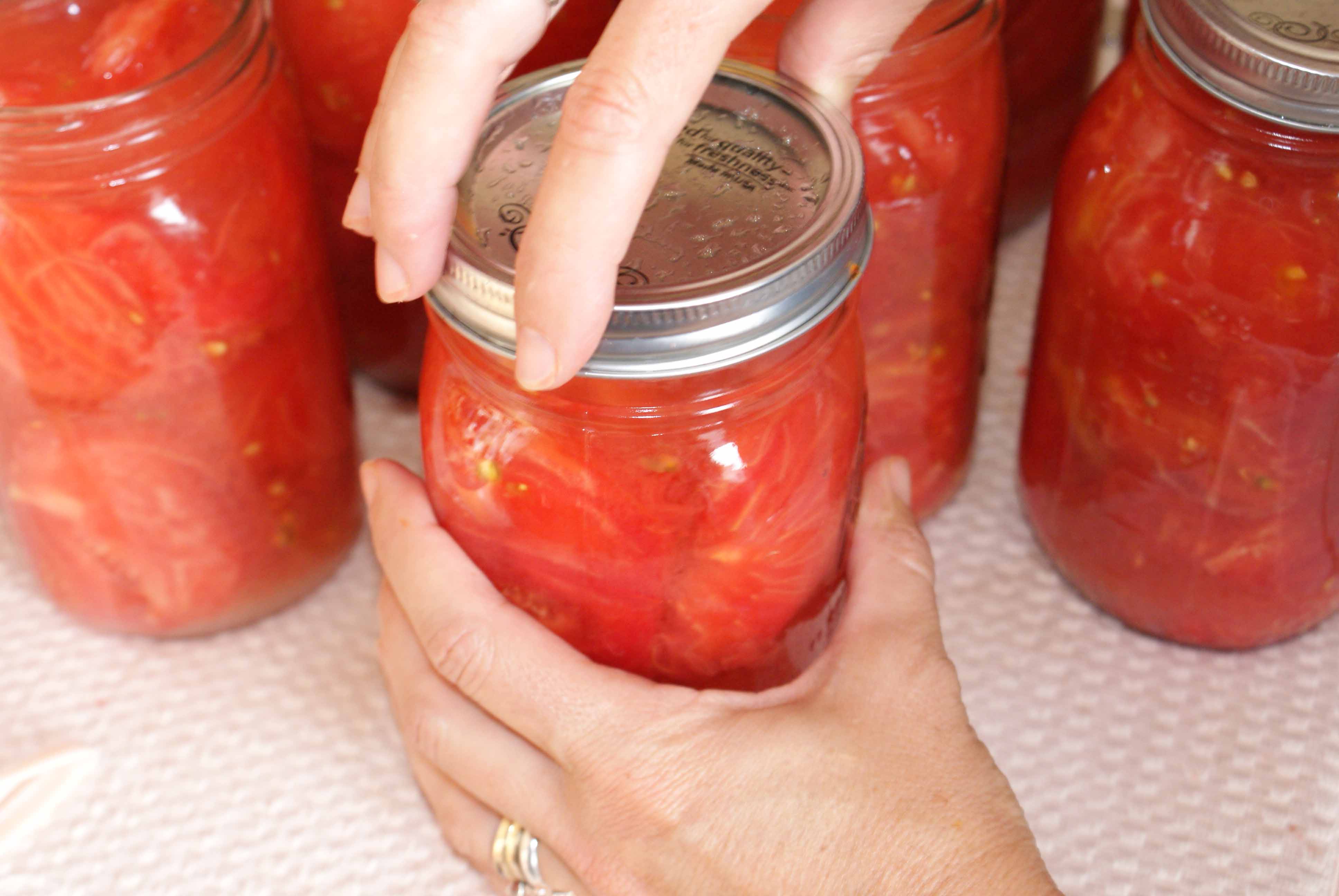 Then boil the jars in a water bath canner or pressure canner. For more detailed instructions, see the website PickYourOwn. We followed their instructions for the most part. The only major difference is that we added the lemon juice and salt into the jars before we added the tomatoes.

Now we’re all set for lots of delicious soups, sauces, and other yummy dishes all winter long!