“The American chestnut is a prolific bearer of nuts, usually with three nuts enclosed in each spiny, green burr, and lined in tan velvet. The nuts develop through late summer, with the burrs opening and falling to the ground near the first fall frost.” — Wikipedia 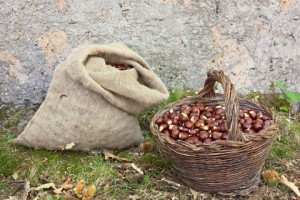 American chestnut trees grow to 100 feet tall.  A healthy, mature tree can produce upwards of 6000 nuts, providing people and wildlife with a tasty, nutritious food during the autumn and winter seasons.

In 1904 a forester in the Bronx Zoo noticed the chestnut trees on the grounds were dying.  By the 1950’s, a chestnut blight had spread along the eastern woodlands, infecting almost the entire magnificent stand of American chestnut trees.  But, the story doesn’t end here.  The future holds hope for the American chestnut.

Conservation & Restoration of the American Chestnut

Today, there are approximately 2,500 chestnut trees growing on 60 acres near West Salem, Wisconsin (the world’s largest remaining stand).  The largest recorded American chestnut tree grows in Sherwood, Oregon.  According to an article posted by the Associated Press in November 2012, the tallest American chestnut tree presently growing in its native region on the east coast may be this 95-foot tree in the woodlands of Maine.

Volunteers in many states are putting forth effort to save the American chestnut.  The Pacific Northwest has been free of chestnut blight since the 1930s.  Oregon State University encourages residents to plant a chestnut tree in your garden (or farm) to grow your own chestnuts. 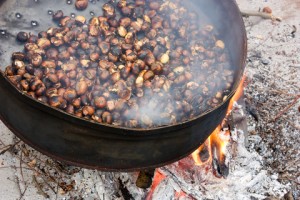 For many of us today, chestnuts evoke a sense of holiday time, although more often in the way of singing instead of eating.  Last month you may have sang about chestnuts roasting on an open fire, but did you actual roast and eat any chestnuts?

Unlike other nuts, which are dried, chestnuts are usually sold fresh and stored as a perishable food. Before refrigerators existed, some farmers and foragers stored fresh chestnuts in a containers filled with damp moss.  How simple!

For culinary creations it’s important to source fresh, local chestnuts.  Once a chestnut can be heard rattling inside its shell, it has dried up and lost its deliciously sweet flavor.

Chestnut recipes were quite common in American cookbooks from the 1800s.  In fact, American culinary expert Fannie Merritt Farmer included many recipes that called for fresh chestnuts in her cookbooks.  Nearly one hundred years ago, Fannie Farmer hosted a 12-course Christmas dinner which included Roasted Goose with Chestnut Stuffing.

Chestnuts are making a comeback in kitchens today.  We found a recipe for chestnut stuffing with leeks and apples on a blog called the parsley thief that sounds delicious!  Roasted chestnuts and brussels sprouts makes an excellent seasonal dish to eat with family at friends in autumn and winter.  Hungry yet?

Flip your 2013 calendars to autumn to write down a reminder to look for fresh chestnuts for next year’s wintertime holiday meals.  When eating seasonally, there’s always something to look forward to tasting!