Who doesn’t love a great big piece of good old-fashioned tangy-sweet rhubarb pie? Besides being delicious in recipes, rhubarb is medicinal and nutritious. It’s classified as a super-food that’s high in nutrition and low in calories and carbs, and has lots of vitamin C, fiber, and potassium. And it works as a natural pesticide that controls aphids and other sucking insects. Let’s look at how to grow, harvest, and cook with rhubarb. Then we’ll talk a little bit about its fascinating history.

Rhubarb is easy to grow. It’s extremely hardy; its roots last through the winter and provide an early spring crop. It grows very well in northern climates, such as the Pacific Northwest and Michigan, the leading commercial suppliers. 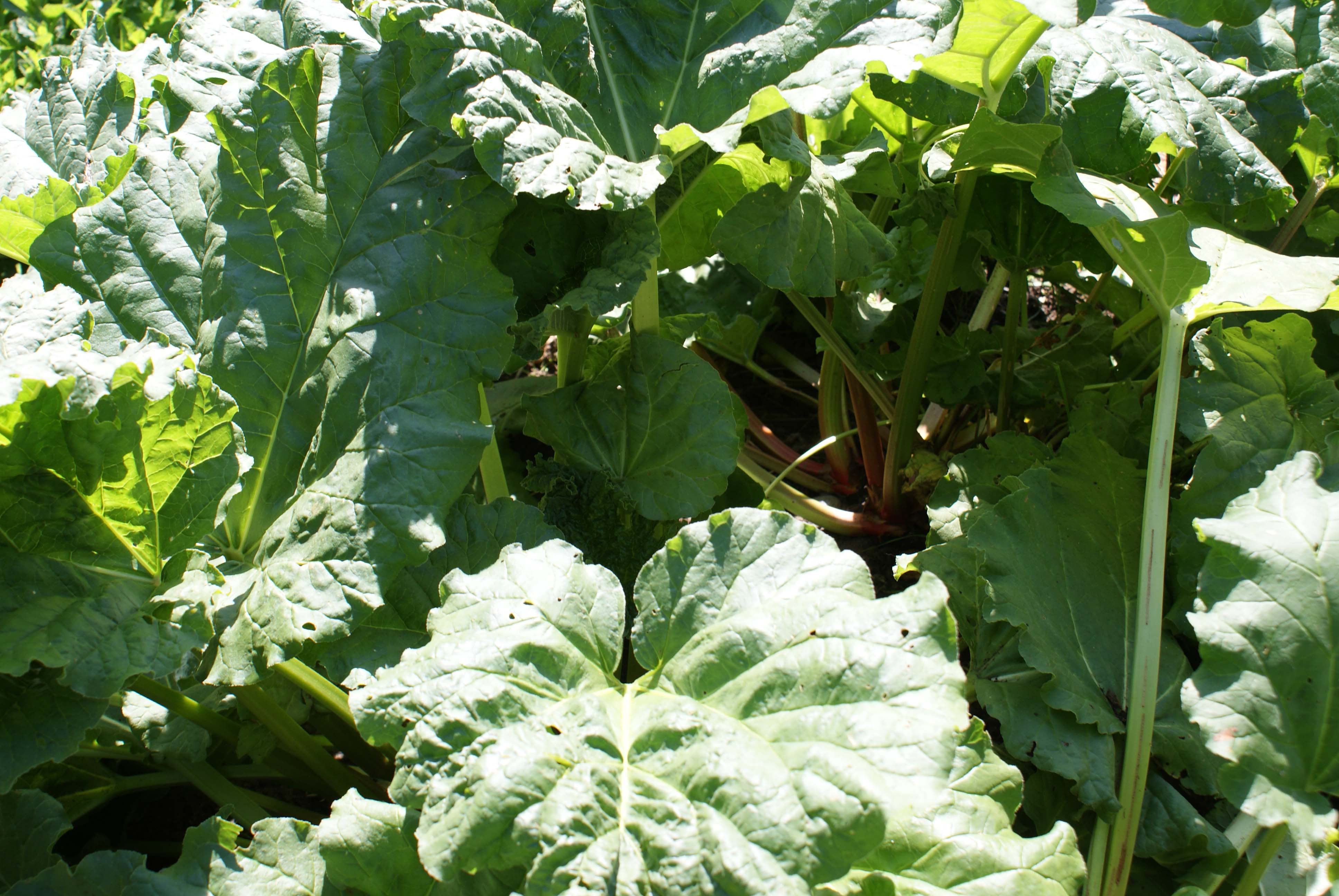 Rhubarb is a perennial that can produce stalks up to 15 years. Let a new plant grow for two years before harvesting any stalks. You can harvest several stalks in year two if the stalks are over ten inches long and have a nice width. Take only one-third of the plant in year three. It’s best to not harvest after July 1 so roots can store enough food for the next year’s growth. Occasionally a rhubarb plant will flower and go to seed. This is perfectly normal, but you may want to prevent this from happening in order to grow more leaves.

Rhubarb has many varieties. It can vary in color from crimson red to speckled light pink to simply green. There is essentially no difference in flavor, although red varieties are preferred in order to make the beautiful colors of vibrant desserts and drinks.

Rhubarb is technically a leafy vegetable of the buckwheat family, but most people know it as a fruit with a strong, tart taste. In fact, in 1947, the US Customs Court in Buffalo, New York ruled that rhubarb is a fruit since everyone was putting it to use that way!

The stalks resemble the size and shape of celery when they’re ready to pull. To harvest rhubarb, solidly grasp the stem, twist to the side, and pull to remove. Do not cut the stalks!

Remove the whole leaf if you are going to use the rhubarb the same day. If not, leave two to three inches of leaf on the stalk. This keeps moisture in the stalk so it remains fresh and crisp longer. 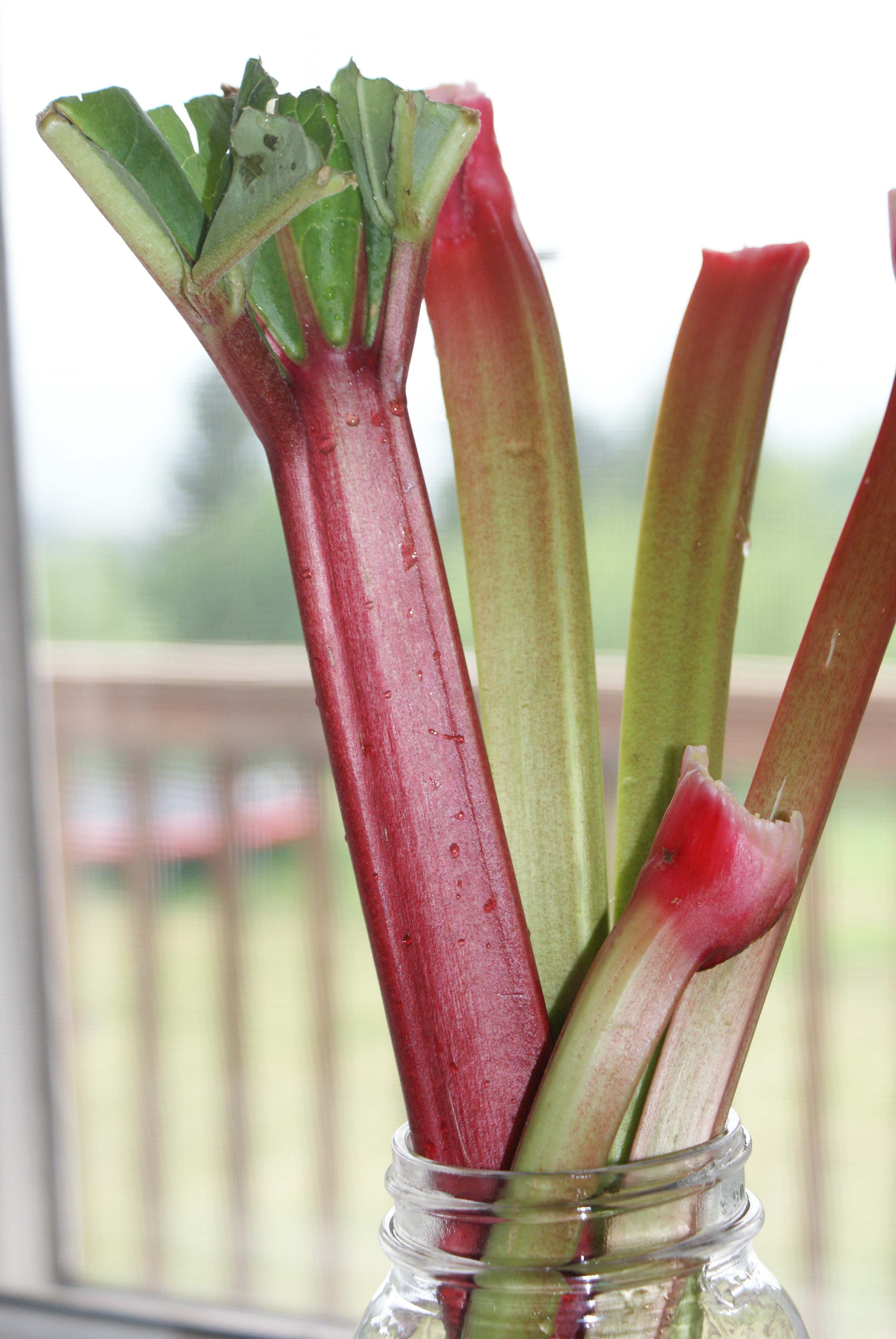 Rhubarb is easy to cook. It is most commonly used in desserts such as pies, cobblers, crisps, coffee cakes, and tarts, and is sometimes referred to as the pie plant. It pairs nicely with strawberries, apples, and blueberries. 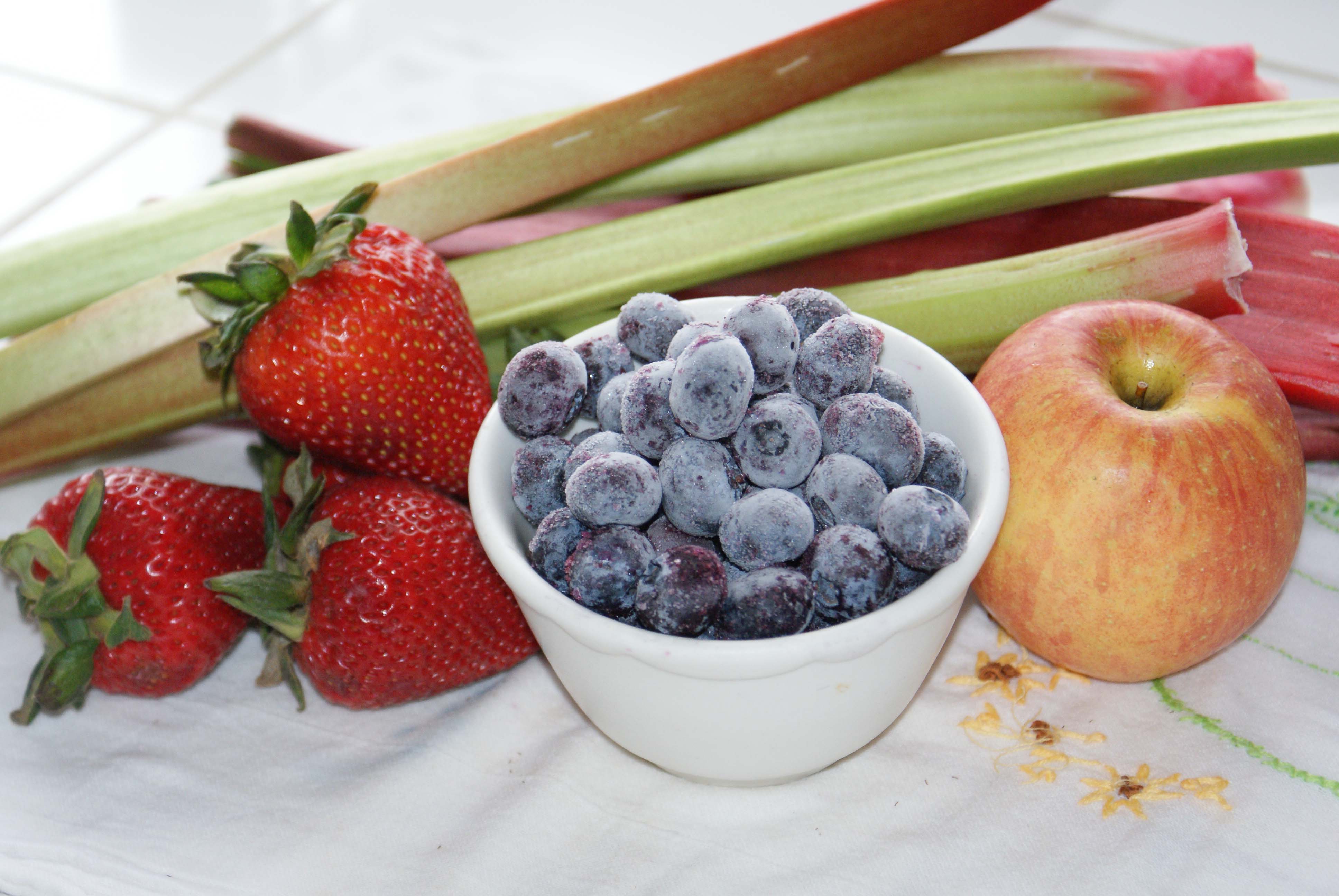 Rhubarb is best eaten with a generous amount of sugar added. It’s very tart in taste, so a ratio of one-half to three-quarters cups of sugar to every pound of rhubarb is usually added to balance the flavor. However, some people eat it straight out of the ground, or they dip the stalk in sugar to munch.

There are lots and lots of rhubarb recipes.  The first recorded recipe was found in the 1806-7 cookbook A New System of Domestic Cookery by Maria Eliza Rundell, and was for a rhubarb tart. What’s your favorite recipe? Leave us a comment below to let us know. A rhubarb cobbler is always yummy! We love this strawberry rhubarb pie with streusel topping. 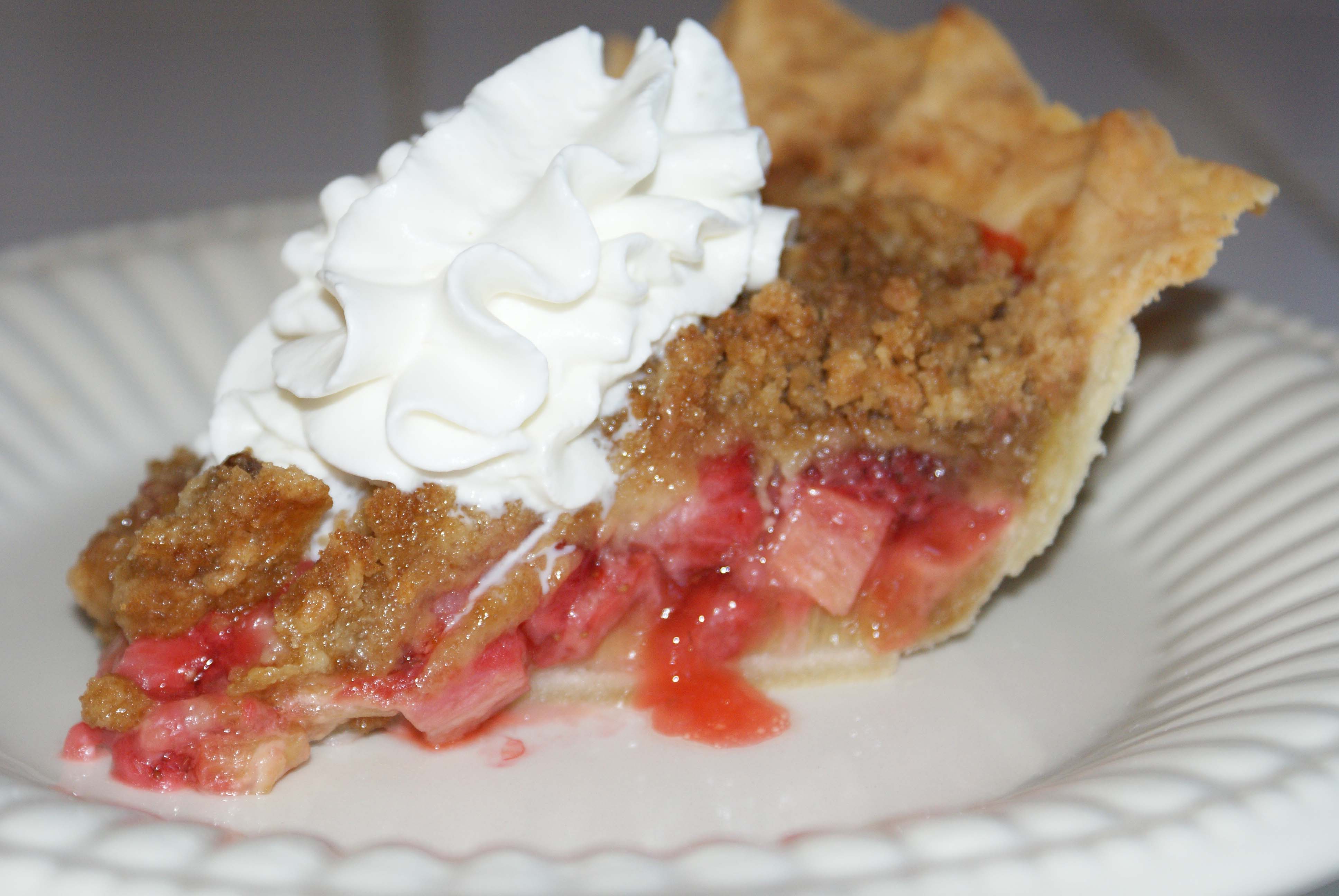 You can freeze or can rhubarb. To freeze it, rinse it well and cut it into one-half to one-inch chunks and seal it in an air-tight bag.

Rhubarb dates back more than five thousand years, originating in China and Tibet. Its roots were used for medicinal purposes up to several hundred years ago when the English first cooked the stalks into tasty tarts. In modern times, the rhubarb pie became to the English as the apple pie is to America!

Rhubarb was highly prized as an import from Asia in thirteenth- and fourteenth-century medieval Europe. The price in Europe was higher than opium, ten times more than cinnamon, and four times more than saffron, which was the most expensive spice of the time. Why? Because it was very expensive to transport across Asia, and it was wanted for its extraordinary healing properties for many illnesses, including constipation, inflammation, and reducing fevers.

Rhubarb wasn’t known in the United States until the 1800’s, but was embraced quickly due to its hardy nature. It was said that pioneer women would smuggle rhubarb stalks onto covered wagons headed west. They weren’t supposed to take anything worth less than a dollar a pound because of overcrowding, but they knew it would survive just about anywhere, in any climate, and would add something special to a homesteader’s fairly bland diet.

One Word of Caution

We always need to keep our furry friends in mind. Rhubarb leaves are poisonous and have high doses of oxalic acid, similar to tomatoes and potatoes. They should be kept away from grazing animals. 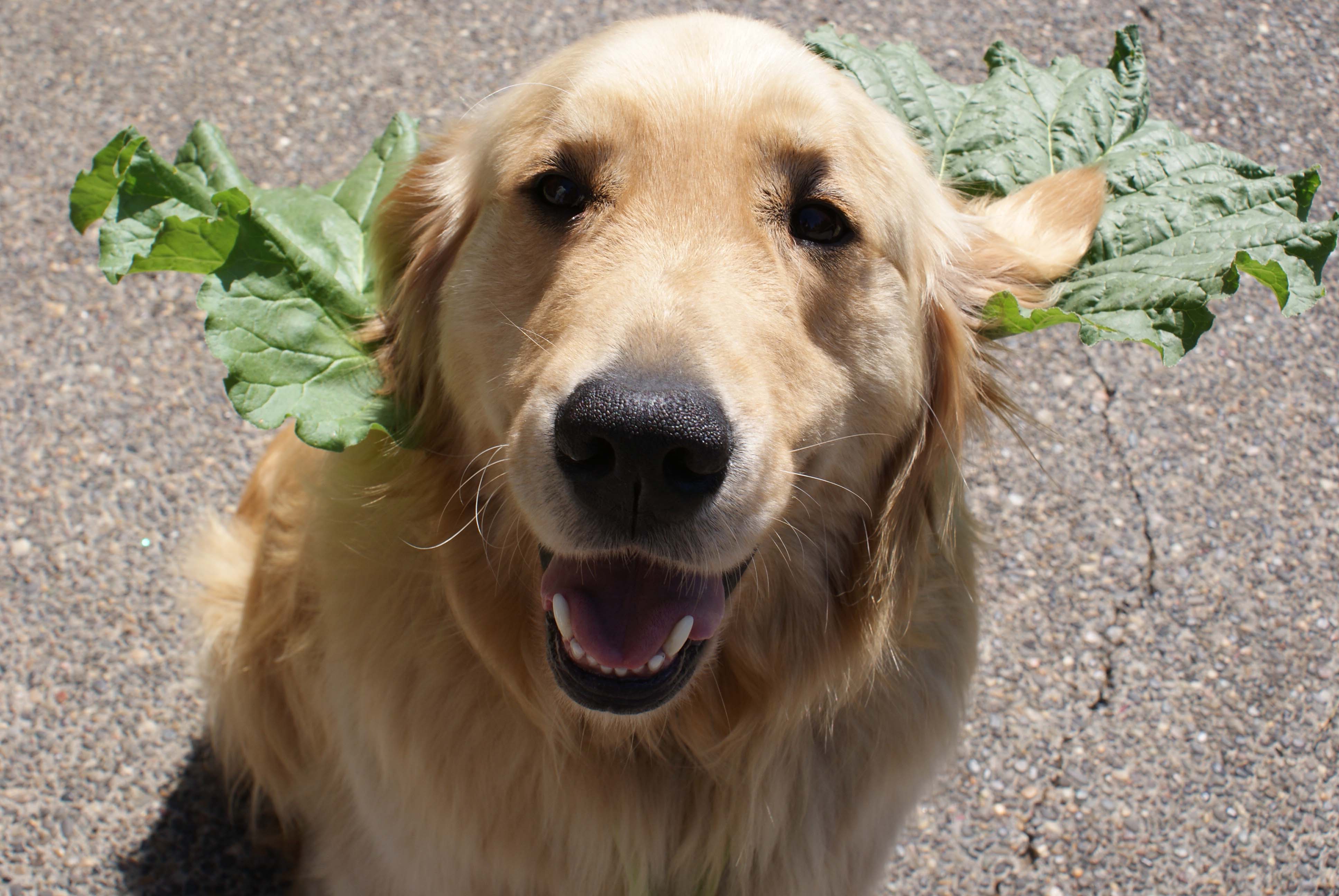